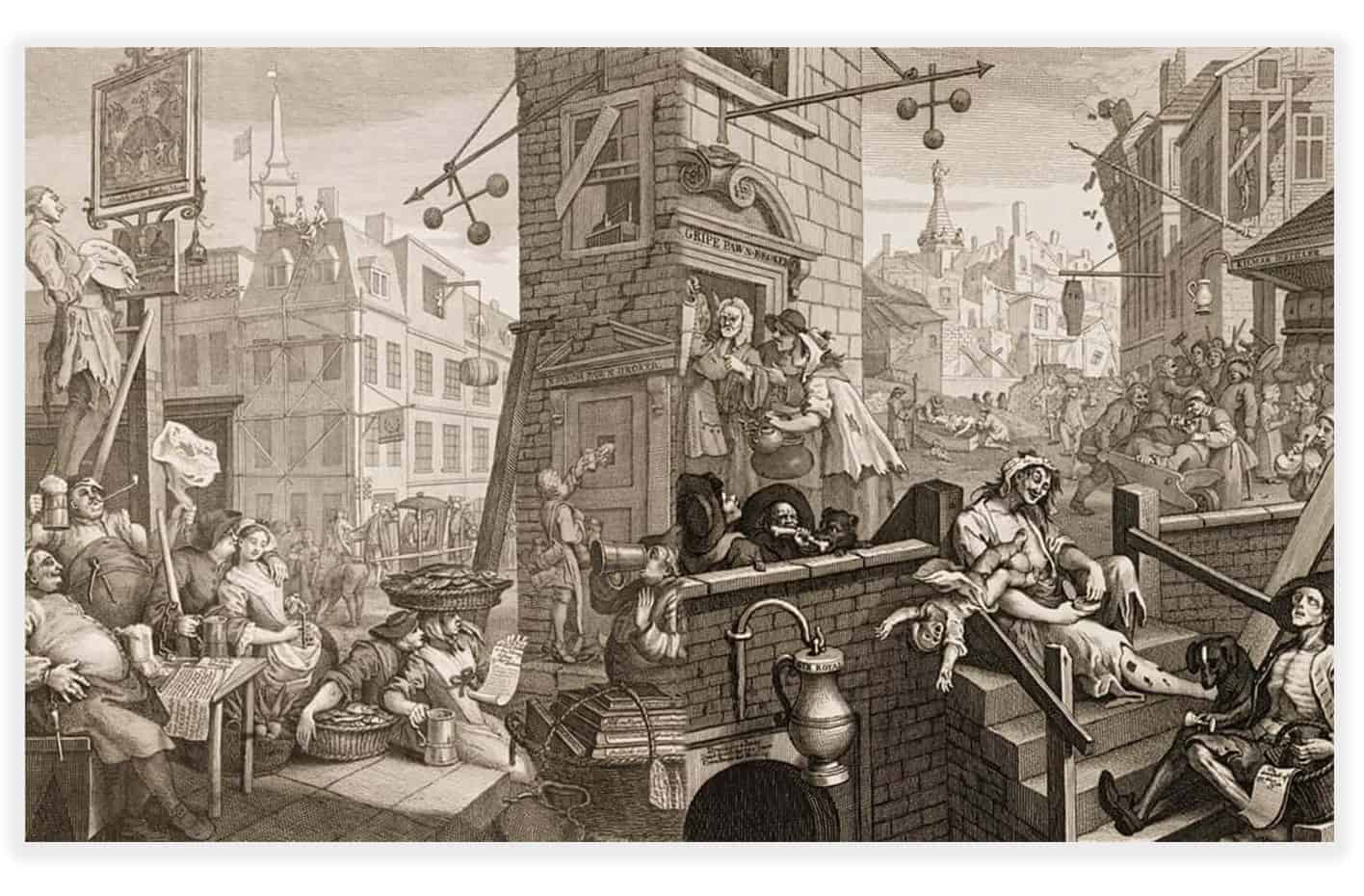 Rather like the inequality of Cambridge in Alison’s blog,  these two combined images by William Hogarth (1697 – 1764), depict the lives of two very different parts of society. On the left side of the image we see the celebrating, well-fed inhabitants of ‘Beer Street’ who are thriving and totally oblivious to the suffering on ‘Gin Lane’ depicted on the right hand side of the image. The only person who is not doing well on Beer Street is the pawn broker.

Conversely, the various inhabitants of ‘Gin Lane’ are all experiencing at least one form of desperation, squalor, death and/or ruin. The thriving pawn broker is accepting the carpenter’s saw, his tool of the trade, and the cookware from the housewife. The working and unemployed on Gin Lane are gripped by the never ending cycles of the consequences of poverty and the inability to break free from it.

In December, Cambridge was the focus of a Channel 4 documentary, not because of its huge economic success (turnover of the Cambridge Cluster grew by 53% in just five years) or because it is reportedly the 5th best paid place to live in the UK. No, Cambridge was at the centre of this documentary because one in 10 households in the city has an income of less than both the national living wage and the real living wage for Cambridge, and there is a difference in life expectancy of 10 years across neighbourhoods. The documentary, ‘Growing Up Poor: Britain’s Breadline Kids’, illustrated the stark reality of social inequality in Cambridge and evidenced why the city has earned itself the shameful crown of the ‘least equal city in the UK’ for the second year running.

Cambridge has had a council-run anti-poverty strategy in place since 2014 and there are various projects and pilots, including a city council Culture Card, designed to drive measurable social mobility through greater access to Cambridge’s culture and arts. But what we don’t have is something that transcends politics and brings together the influence and resources of public, private, voluntary and community groups in collective effort to achieve real, sustainable change.

For five years I have volunteered as a governor in a school at the centre of one of Cambridge’s most deprived neighbourhoods and have seen first-hand some of the horrible issues and challenges that disadvantage brings. During this time, the Conscious Communications team has become involved in a number of initiatives designed to help underprivileged young people and, at the start of 2019, we were keen to understand how best to measure the positive (or otherwise) impact of these initiatives, so that we could be confident we were directing our efforts effectively.

We believe that the UN Sustainable Development Goals provide a useful strategic framework that could unite the Cambridge community in action to fight inequality – the 17 Goals are intrinsically linked and, together, designed to build healthy and prosperous communities. For example, the family environment has an impact on physical health and mental wellbeing, as well as on behaviours, expectations and ambitions. Children growing up without adequate food, clothing and parental support are more likely to be exploited or lured into crime.

Each Goal has associated indicators to enable measurement of outcomes but our conversations with the UN and the UKSSD organisation highlighted the lack of modelling available for development and measurement of sustainable communities at a local level. So, we concluded that we would need to develop our own Cambridge model from scratch, which could potentially be contextualised and replicated in other cities in the future.

It was clear that there were (and still are) many organisations already working hard to help address the impact of inherited and societal inequalities in Cambridge. But these organisations often work independently, in isolation and sometimes in competition (for funding), and the result can be disjointed and patchy intervention, which doesn’t deliver the level of impact that the few available examples of successful small-scale collaborative efforts demonstrate is possible.

One of the things that illustrates to me the value of a joined-up strategic approach is the collaborative work being delivered through a partnership between YMCA, Allia and Howard Group, to help those living on the streets find work and accommodation. But, simultaneously, we need to be channelling adequate resource into addressing the root causes of why these people ended up on the street in the first place, otherwise we will simply continue treating the symptoms and will not break the cycle.

It is this thinking, supported by robust evidence from many sources, including the Equality Trust, that led to the formation of Cambridge 2030 in 2019, which will be launched as a charity early this year.

As an early example of how the Cambridge 2030 approach might work, a collaboration between Abbey People, Cambridge Sustainable Food, Cambridge United Community Trust, CoFarm, and Groundwork East has been formed to tackle food poverty and health inequality. Joint activities include establishing a 7-acre community farm where people can grow their own low cost and organic foods, and supporting local schools in growing their own food on school grounds, with linked curricular study programmes around sustainable food.

Looking forward to 2020, there is masses to do but, with the intellect, influence and resource of more than 50 supporting Cambridge organisations already committed to the Cambridge 2030 plan, we are well placed to deliver, measure and evaluate the level of positive social change that Cambridge can be truly proud of.

So, 2019 was the most extraordinary year for Conscious Communications, not least because we proved again that with perseverance and determination, each and every one of us is capable of achieving amazing things.  Sometimes it just takes a vision, faith in human kindness, and a dog-with-a-bone attitude to get things done!