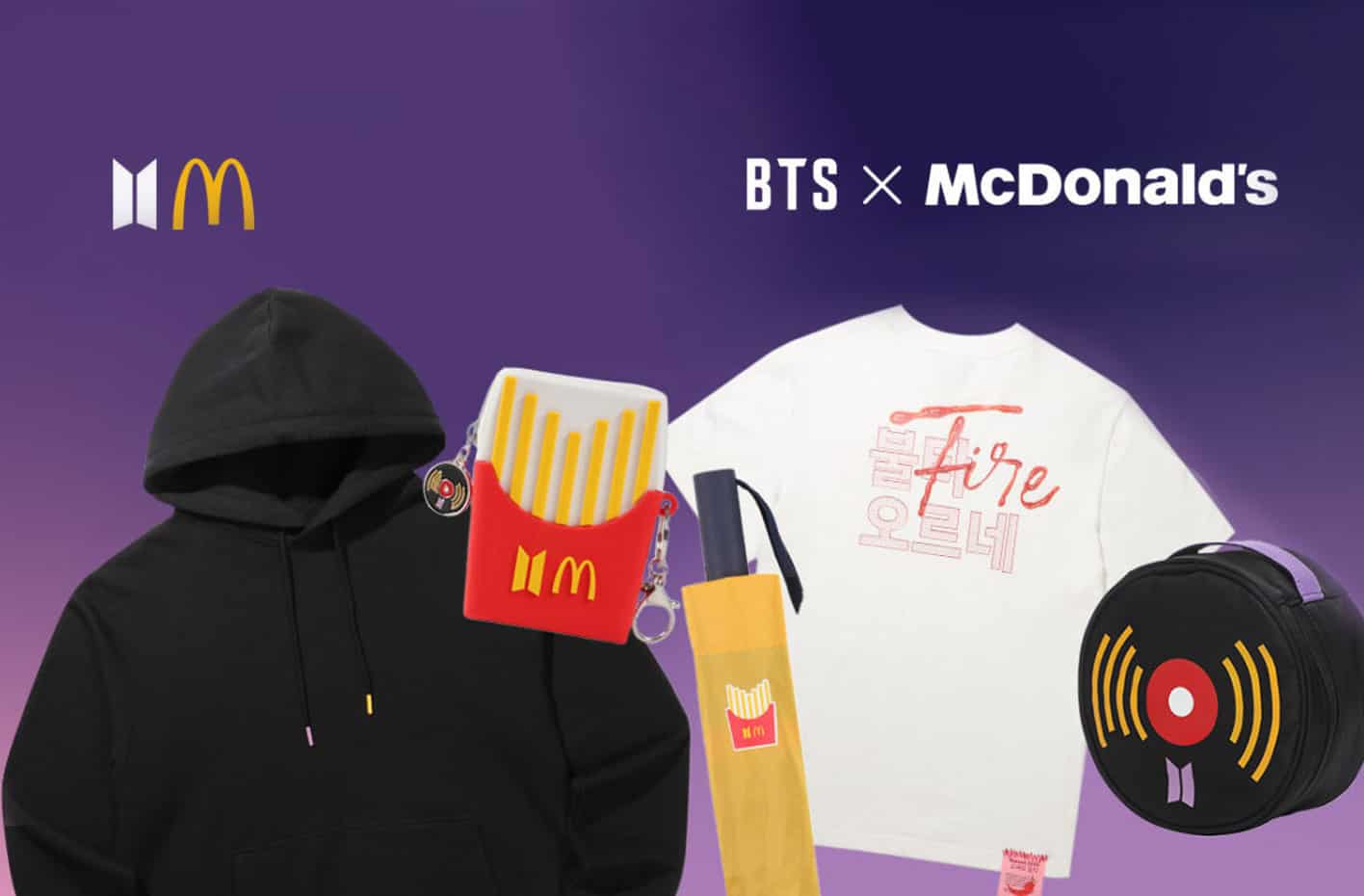 BTS x McDonald’s: my favourite collaboration of the year

BTS x McDonald’s: my favourite collaboration of the year

I have been following BTS’s career for a few years now and I have always been inspired by their music, performance, integrity and perseverance. Through their global dominance, they have been able to work with some of the biggest brands in the world and this is surreal to witness, knowing how tough their journey has been. When the collaboration with McDonald’s was announced in May this year, it was very exciting and was one of many examples of just how far they have come as a group. BTS and their team have always been appreciative of a good marketing strategy and have taken design very seriously; I continue to be inspired by their approach to design.

The marketing campaign for the McDonald’s BTS meal was extensive, across several platforms and was inclusive of both fans and BTS’s Korean culture. I loved the creative produced for the campaign; it was clear how much of a collaboration this was between the McDonald’s and BTS’s own marketing and graphic design teams, to ensure it was not just executed to a high standard but in a way that would resonate with the BTS ARMY and the wider global audience.

The collaboration began with the BTS meal announced, a list of countries where the BTS meal would be available to purchase and a TikTok video, featuring the BTS logo made out of McDonald’s fries (brilliant!) with the BTS members singing the iconic “Ba da ba ba ba” jingle. The #BTSMeal and #BTSxMcDonalds hashtags trended worldwide with fans speculating about what the meal could include, what sort of merch would be available and how McDonald’s staff uniforms would look. It was so exciting!

Much like a BTS album roll out, a ‘promotion schedule’ was released showing what to expect and on which dates. McDonald’s in-country Twitter accounts re-skinned their channels to the collaboration branding and began to interact with the BTS fandom, sharing clues and hints about the collaboration. One of these clues was three photos featuring BTS without their faces showing, making fans guess based on their outfit and their hands only. A clever teaser tactic for engagement.

This was then revealed through different ‘concept photos’, followed by the release of the commercial video, featuring the record-breaking single Butter (a favourite Friday song of mine). A “behind-the-sauce” video was then posted a few weeks later.

The colour scheme across all designs incorporated the purple associated with BTS and the BTS ARMY. The purple comes from the Korean phrase ‘Borahae’ which means ‘I purple you’ and was popularised by one of the BTS members. The phrase was included on the packaging at McDonald’s restaurants around the world.

The fast-food chain also adapted its menus across the world to include limited edition sauces, Sweet Chilli and Cajun, usually sold at the South Korean branches of McDonald’s and the McNuggets were halal, catering to a global audience.

The collaboration also made its way to the McDonald’s staff t-shirts, which had BTS x McDonald’s in Korean, using colours associated with Korean culture.

Restaurant visits were up 12% during the first seven days of the campaign, and stories went viral of fans donating to support delivery drivers in the Philippines and Indonesia after news that they were inundated with several BTS meal orders. Fans also made a ShareARMeal campaign to provide meals to support the less fortunate; very typical of the BTS ARMY. To support this campaign in the UK, fans raised money in aid of FareShare.

A variety of BTS x McDonald’s merchandise was sold on the Weverse Shop platform (I had to stop myself from buying it all!), which was easily accessible to fans, and orders also featured a special gift of limited edition collectable photocards.

The merchandise designs link McDonald’s themes with BTS songs and also featured drawings by the members themselves; these were very eye catching and desirable for any BTS fan!

While I was, of course, disappointed that the collaboration wasn’t available in the UK for me to enjoy (due to government regulations on fast food), it cannot be denied that this was a hugely successful campaign utilising digital platforms physical locations; totalling 1.2 million sales! It was very special seeing communities around the world come together, especially during such a difficult time with the ongoing pandemic and proves that a cleverly planned and executed collaborative campaign with eye-catching, colourful and fun designs is the key to success.