Managing a business’s Twitter account can be a daunting task in itself, and creating engaging content can even seem impossible. You only have 140 characters so it is important to make each letter and punctuation mark count! Chloe, our PR and Marketing Executive, discusses how to make tweets a hit every time!

Tagging accounts on Twitter (known as “mentions”) will instantly let a profile know you want it to be involved in your conversation. If you are appreciating the work of a company, or talking about a particular individual and they have a Twitter handle, tagging them will instantly notify your interest in their work, resulting in a retweet or a reply, hopefully! It’s an easy way to build relationships.

Starting with a full stop

The hashtag started its reign back in 2007 when Chris Messina tweeted:

Since then, the humble hashtag has become a part of everyday conversation – both on and off line! Keeping on top of trending topics online is a must for marketers, if they are to grab the attention of existing and new audiences. If you want your tweets to have maximum reach, then include the popular weekly hashtags such as #MondayMotivation or #ThrowbackThursday. At Conscious Communications, we like to use #WednesdayWisdom to showcase our expertise! It is really important that businesses make sure to use a balance of top trending hashtags as well as the more unusual/targeted ones too; your posts are less likely to get lost amongst a constantly updating Twitter feed if you are within a slightly smaller group of users of a particular hashtag. We like to use a number of platforms to make sure we are using the perfect hashtag, one we have been using recently has been Display Purposes.

According to research posts with images are 18% more likely to get website link click throughs, 89% more likely to be favourited and 150% more likely to be retweeted. What’s even better, images can work for pretty much any brand. Social media users today are hungry for visual content – think photos, videos and GIFs. Twitter now includes the handy GIF button to accompany posts (read my previous blog on GIFs here) and images are no longer included in your character count (hooray!). If photography isn’t for you, maybe an infographic might be suitable? Take this tweet from Mintel for example…

Infographics are an effective way to convey statistics. If the above stats were to be posted on Twitter in plain text then the chances are followers would scroll past, but the vibrancy of an infographic is more likely to stop people from scrolling past and encourage them to engage with your tweet.

Time is of the essence

On average there are around 500 million tweets posted every day, so, it goes without saying that there is stiff competition to achieving high engagement. But, as Twitter has evolved, research on the platform has too; one overarching fact that has come to light is that many Twitter users primarily use the site on mobile devices and tablets. In light of this, Twitter produced a report that reveals these mobile users are 181% more likely to be on Twitter during their commute. Using sites like Tweetdeck and Hootsuite are helpful tools to ensure your tweets are scheduled at the right time of day (or night), and can also allow you to plan ahead. To find out when the most effective time will be for a business or brand to tweet, we like to use a tool called Tweriod, a free platform that reviews your followers and works out when the best time is for you to tweet.

The polls are in!

Twitter polls are a fun way to increase engagement and also canvas your followers’ opinions. Dependent on your brand and your following, you can tailor your poll to fit with your personality. Eventbrite used a Twitter poll to find out whether its followers attended paid events on New Year’s Eve:

A fantastic way to ask a fun seasonal question, but also a clever way to find out whether its followers are going to be interested in the advertisement of New Year’s Eve events. Twitter polls don’t have to have a specific purpose either, if you have an informal tone to your brand, they are a great tool to convey personality; take Domino’s for example. 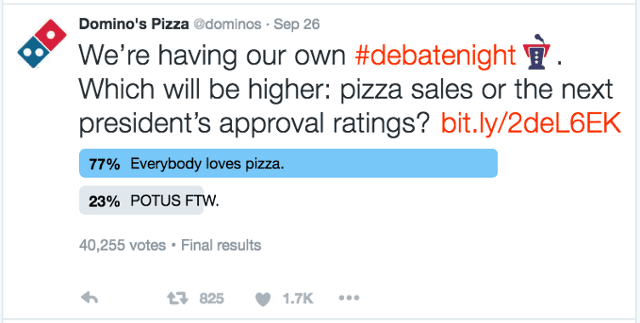